All you need to know about Poool's new script.

Written by Flore Bayle
Updated over a week ago

We took the new Dashboard release as an opportunity to revamp the existing Poool's script... You know, it's thanks to these little lines of code hidden in your web pages that the magic happens! ✨

In this article, we explain all about the new scripts. Yes, you read correctly: scripts with an 's' because there are now two of them 👶👶!

Let's start with a quick definition:

poool.min.js (the initial Poool script) was created to fulfill a very precise need - display a paywall on a publisher's website, blocking access to content and unlocking it if the reader subscribes or realizes an alternative action such as newsletter registration, advertising video viewing, etc.

When the script was designed, websites relied on technologies that were based on the page reloading whenever a change that occurred on a page.

But, today, technologies have evolved, and they now allow for several actions to be completed on a page (or even change the page itself) without reloading.

Websites using React, for instance, work this way - concretely, only one page exists. The rest of it is a group of animations. There's no page reloading. It's totally transparent.

Also, back then, no technical team was dedicated to this implementation. So the marketing team was in charge of integrating all the scripts needing to be executed in Google Tag Manager (GTM), including Poool.

Because of this, Poool's script was conceived to look like what the team was used to integrating, i.e a script close to Google's Analytics' one.

Poool's script has been split into two parts: Audit and Access.

Our tech team has chosen to conceive a script in two parts.

One is mandatory, Access, whilst the other is optional, Audit.

But, why this distinction?

The difference comes simply from the data we choose to track. Access allows us to track data that arises from the wall only, independently of any actions that happen on the website. Audit, however, is complementary, it tells us more about other data (website browsing, audience behavior...), outside of our wall.

For our product to function correctly, we absolutely need the data from the paywall. Which is why Access is essential.

On the other hand, it is totally possible to make it work without the website's data. Which is why Audit is optional.

As you know, we can now display different paywalls on a single page. For each paywall desired, one Access script should be integrated.

As you've understood by now, the two scripts allow you to track different elements.

When Audit and Access are used together, all tracking (page + wall) goes through Audit.

Access tracks only data linked to the wall, so you won't have native segmentation for instance.

Poool script integration will be done by your tech team. All technical documentation is available here 👉 here

Your technical team will integrate Audit script and then the Access script to display your walls.

In this exemple, we integrated Audit script and 2 Access scripts to display 2 different walls on the page : 1 wall will be displayed over the content and the other beneath the article. 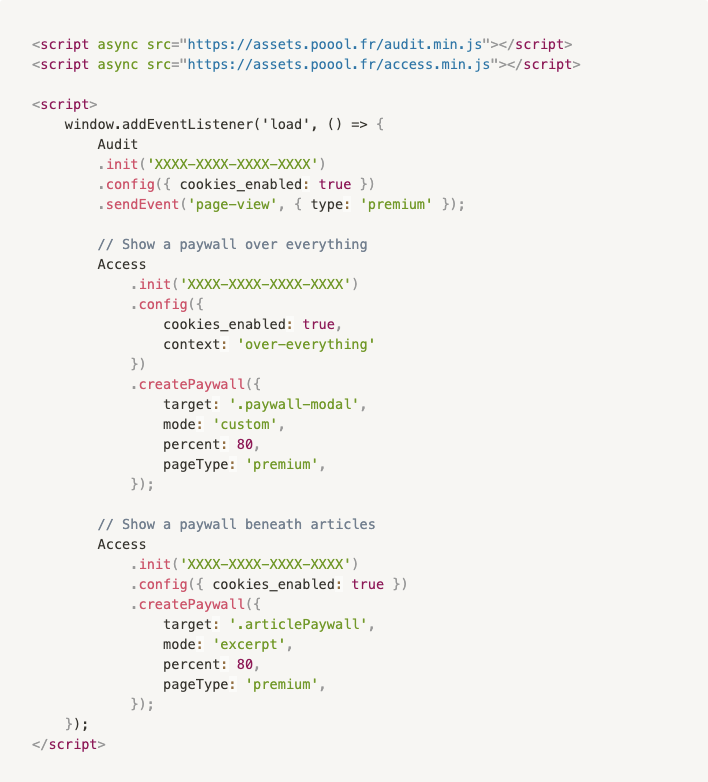 If you don't want to use our native segmentation, or conversions, etc., your technical team can integrate the Access script only, based on the number of walls you wish to display.

In the example below, we integrated 1 Access script to display 1 wall on the page.

How does it work on the Dashboard?

Nothing changes. You have access to all information on the Dashboard.

Nevertheless, with Access integration alone, you cannot have access to the "All users" group, as this one works with native segmentation.

The process of creating scenarios remains the same, independently of which script integration you choose.

BUT.... thanks to the new Access script, a small novelty appears in the widget parameters 🙂!

You can now indicate where on your page you'd like to display the wall, using the CSS selector. You just have to complete the dedicated field 'Target parent element inside the page (css selector)' in the 'Advanced settings' area of a widget.

To better understand this concept, don't hesitate to check out our article How can I create a fullscreen wall over my content?

And, from the reader's side?

According to your configuration, the reader will see 1 or several walls on a single page. Each wall is loaded asynchronously, to avoid a slow page loading speed.

Don't worry, if you previously integrated Poool, you don't have to change a thing.

The initial script has been completely rewritten to implicitly use Audit + Access, ensuring a smooth transition, and, above all, to avoid you having to redo your integration!

These changes have 0 impact on your existing integration.

Did this answer your question?